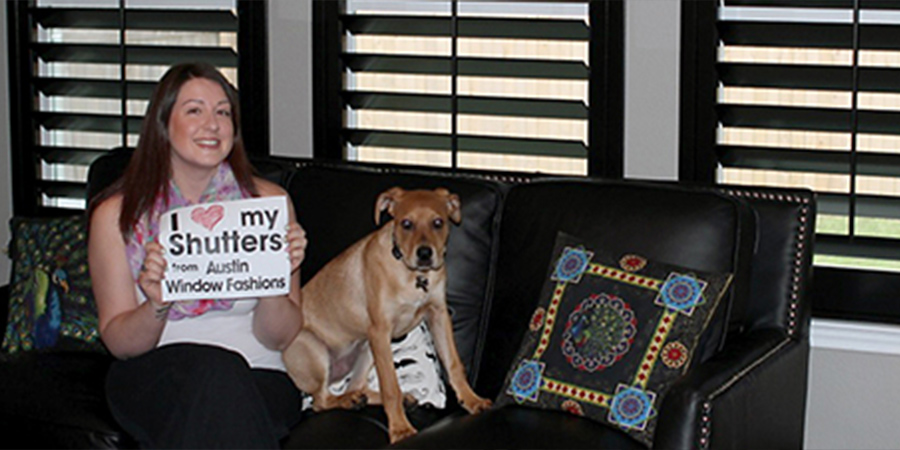 Do you have a very particular style? If so, you know that it can make shopping for anything from clothing to home furnishings a challenge. Austin Window Fashions client Amanda Poletti describes her style as very particular, but she doesn’t try to hide it or apologize for it.

“I love black. I have black dresses, black clothes, black purses. I’m not a fan of brown or neutral; I prefer black, white, and gray,” she explained. So when it came to her building her very first house, she went with her style all the way. And that included some non-traditional black Plantation Shutters throughout her home.

She was looking for high contrast and achieved a sophisticated look with dark cabinets and light countertops. “And I chose these beautiful gray tiles for all the wet areas. You walk in and there’s huge impact – white crown molding, gray walls, dark flooring and black shutters.” Her goal was to keep it bold, but simple so she could add in statement pieces like her beloved gray leopard print wingback chairs 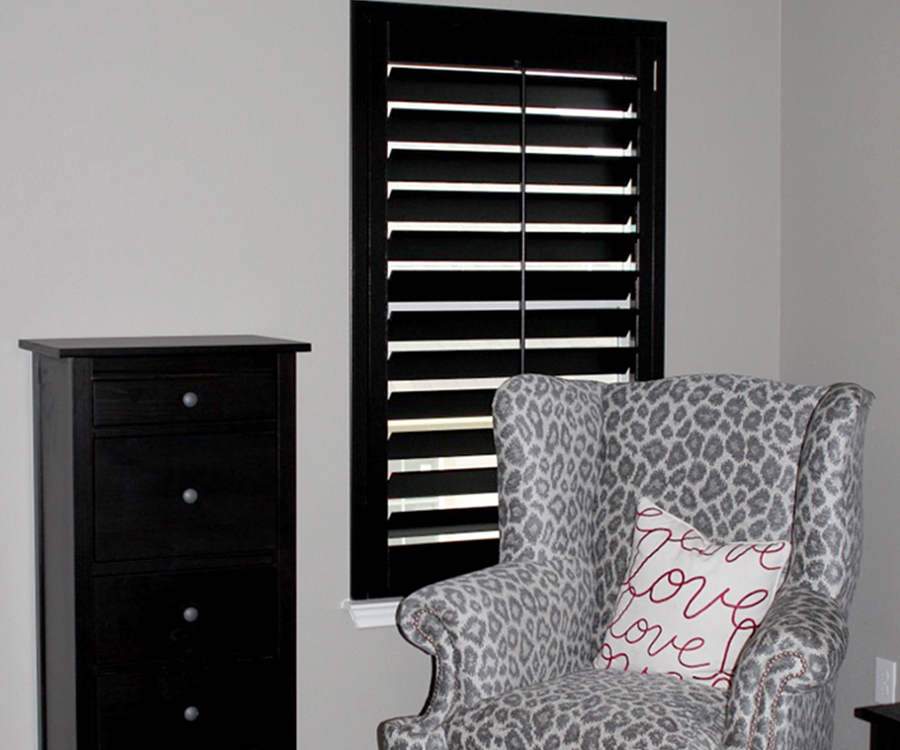 As Amanda’s house began to come together, she visited AWF to see her window treatments. She said, “I knew I wanted plantation shutters because I think they’re simple and they have a really good style.” But plain white did not appeal to her. Despite it being the “normal” thing and better for resale value in a house, Amanda just couldn’t make herself go with white. “I decided that if I was going to build a house, I was going to pick things that I really wanted.”

Amanda mentioned to her design consultant, Laurie Clifton, how cool it would be to have black shutters. Much to her surprise, Laurie said that AWF can easily do black shutters. “I couldn’t believe it!” Amanda said.

Despite her excitement over finding and purchasing exactly what she wanted, she had second thoughts while waiting to receive her shutters. She suffered a classic case of buyer’s remorse that follows a large purchase: “I had this vision in my head of how it would look, but before they were in, I’d have these moments of panic where I wondered, ‘What if it looks awful?’”

However, Amanda had no reason to fret. “I remember the morning when the installer came. I walked in and I was shocked! They were just so beautiful and perfect. They were everything I had envisioned them to be.”

And Amanda’s not the only one who thinks they’re great. “Whenever anybody – friends, family, people working on the house – walks in, the first they say is ‘Oh my gosh, I love your windows!’”

In the end, Amanda’s unique style helped her create a beautiful, comfortable home that she truly loves. “The black shutters just tie everything together. The house is very stylish and unique and I’ve never seen black plantation shutters in anyone else’s house. I wouldn’t change anything,” she said.

With the help and encouragement of Laurie from AWF, Amanda found exactly what she wanted and achieved a unique and beautiful look that stands out. 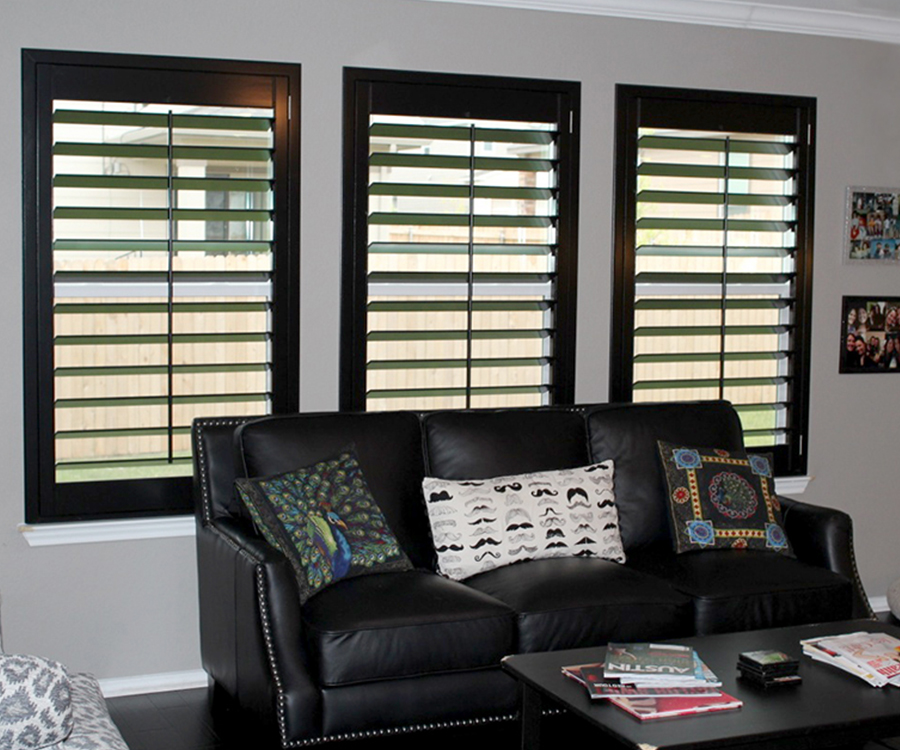 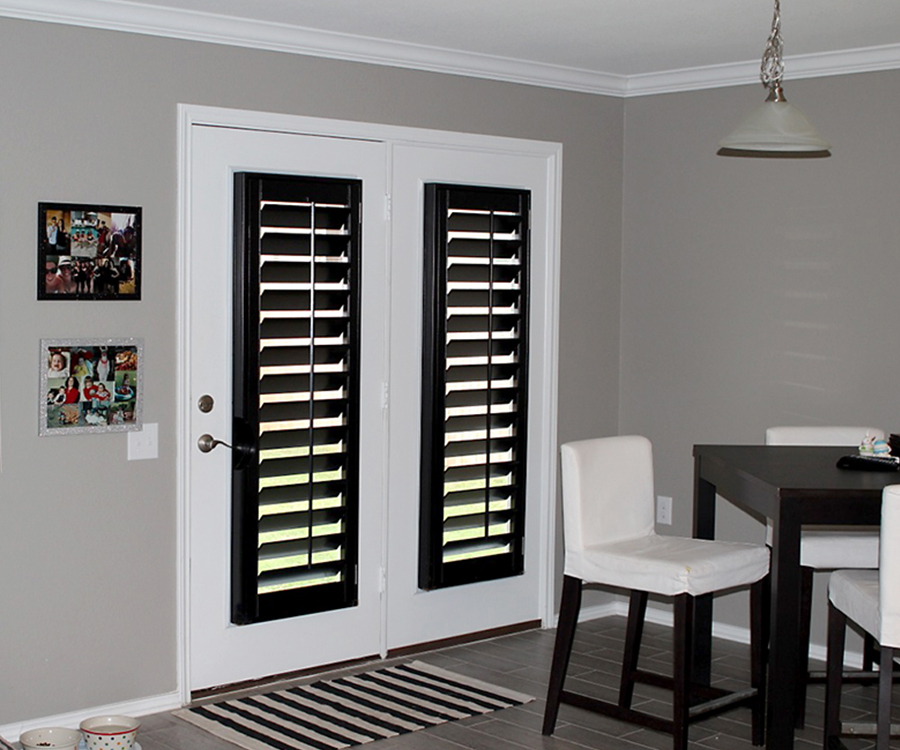